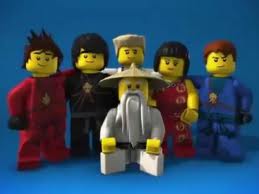 In the second season, there is a samurai.  The ninjas are jealous because the samurai has a really cool XO suit.  They find out that Nya is the samurai, and then they are not jealous anymore.  Nya was the mysterious samurai because she was helping the ninjas on Destiny’s Bounty. The Destiny’s Bounty is a flying ship that the ninja travel on.  Nya is Kai’s sister.