Popular Vacation Destinations in France (and my vacation adventure in Morocco!)
by Tor P., 5th grade 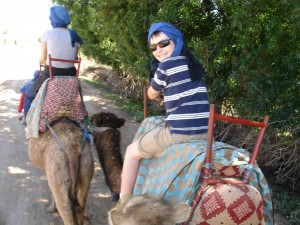 The French love beaches. In August, which seems to be the magic month for vacations here, the trains to Nice are packed and the three Paris train stations that have connections to Nice are crammed full. Even the Parisians who didn’t book their tickets to Nice months in advance can have fun at the beach, though, since every August tons and tons of sand is hauled onto the banks of the Seine river to create a fake beach. The French want to drop everything and go to the beach (or go skiing, in winter), which is probably why there are five major school vacations a year: three months in summer; a week in October; three weeks in December; two weeks in February; and three weeks in April, which I am in right now (and while you are dreaming about going to school in France, I am getting bored to death with nothing to do at the end of a long vacation).

But I just got back from the most exotic trip of my life: five days in Morocco (in northern Africa), which is another popular French vacation destination. My family and I stayed at a resort outside of the city of Marrakech, and when it was cold we went into the city and haggled over prices of exotic things in the souks1, ate schwarma2 in little street side grills, and even went on a camel ride (photo included)! When it was hot we stayed at our resort and played in the swimming pool and its three waterslides. Maybe I am grateful for French vacations—as long as they keep them short. 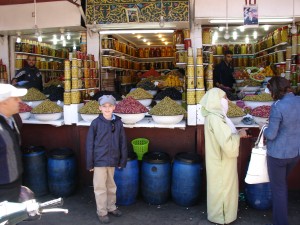 1: Souks are the traditional, funny-smelling street markets of Marrakech. They are full of olives (photo included), headscarves, and reckless motorcyclists.
2: Schwarma is a classic Moroccan food. It consists of chicken or lamb rolled up inside a tortilla-like flatbread.

« All about Ninjago
The Flying Taco »