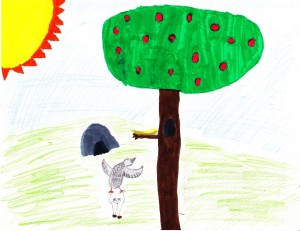 Henry was a tooth. He lived in a kid’s mouth. The kid was named Larry. One dark and scary night, Henry was starting to wiggle and wasn’t too sure about what was going on. Henry felt like screaming for help because it hurt a little. When Henry started to scream, all the other teeth said “Hey we’re trying to sleep here man. Quit making all that racket!” Henry said, “Why should I stop screaming? I’m wiggling and it hurts!” The other teeth replied, “That happened to Alex once and we never saw him again. He must have gone on an adventure.” Just at that moment, an alarm went off. Larry, mumbled “The T.V. is warm…..” ” Shh! Quit talking, everybody, or Larry will hear us! Do you want him to hear us? No!” said the Elder Tooth. Henry said ” You’re just trying to ridicule us (which means tease) aren’t you?” “SHH!!” Said Ed, the Elder Tooth.

This time they obeyed and even Henry listened. But then a terrible thing happened to Henry and without warning, he was yanked out of Larry’s mouth, and fell through midair tumbling, flipping, flopping, crashing down to the furry carpet. Then he thought THIS is the end of me.  But because his arms were up in the air he caught something squiggly and warm(which was a flake of dust). The window was open, and suddenly, Henry flew up and out, flying to the bright orange-pinkish-purple sunset. The more he held on, the more his hands started to slip.
“EEEEEEEEEEEEEEEEEEK!” screeched a bat nearby. Henry was so scared, he let go of the dust and fell.
“Caw! Caw caw!” said a crow, scooping up Henry.
“W-who a-are y-you?” said Henry.
“Cedar. Anyway you should be at the Tooth fairy’s house.” replied that crow who saved him.
“May I please live with you? Please?” said Henry desperately.
“OK,” said Cedar.
Together they flew, higher and higher, and finally, they were in the crow’s nest.
“Ouch! This nest is prickly!” said Henry as a twig poked him.
“Oh, I’ll gather some moss and other soft things,” said Cedar happily. Henry was so glad he would not be poked by twigs. He couldn’t stop thanking Cedar.

In about 5 minutes Cedar came back. You know when you’re really excited, right? Well that’s how Henry felt.
“HOORAY! YIPPY!” said Henry joyfully.
“Here’s your bed, and there’s the carpet,” said Cedar who was laying down.
“Thank you!” said Henry happily. Cedar did not reply. Calming down, Henry said ” Are you OK?” But before she could answer, there was a ‘popping’ noise underneath Cedar!
“I’m laying eggs!” said Cedar excitedly. When Cedar stood up, 5 eggs were where she was sitting! On Sunday, at noon, one by one, the chicks came out of the eggs. Henry was stepping back but then, Henry fell off of the nest! When Cedar looked back, Henry was nowhere to be found!
“Henry!” yelled Cedar.
“I’m down here!” said Henry talking from a far away cave.
“What are you doing?!” yelled Cedar.
“Living, what else do you think I’d be doing, hm?” replied Henry.
“I’ll say no more.” said Cedar sighing. “Good-bye Henry.”
“There’s no good-bye and there’s plenty enough room and there’s a bunch of worms, and 30 rooms too!”said Henry.
“Caw! But it’s dirty!” said Cedar
“Never mind that! I’ll clean up! Here! Take these!” Henry said happily.
“Don’t read them, it’s a surprise!”
“Uh, OK.” said Cedar. When Cedar came back, she had 15 crows behind her.
“Hello! There are dances, feasts, and a make your own ice cream sundae station. Please enjoy the party.” said Henry happily.
“OK,” said the 15 crows and then they started to party. One crow went to the make your own ice cream sundae station. One crow put almonds, chocolate sauce and every single color of sprinkle that exists. Five other crows played Hot Potato together, four crows formed a circle and sang and danced to the music and five helped themselves to seasoned herbs and seeds. When everyone left, Henry thought how will I go from place to place? I can’t ride Cedar because  I’m afraid of heights, I can’t walk on foot, so maybe I should ask Cedar. “Hey, Cedar! How do I go places?” Henry asked. Cedar asked “Are you afraid of heights?” “Yes. I am.” said Henry “Jump onto my back.” said Cedar. As soon as he jumped on, Cedar took off. Henry was now not afraid of heights. Henry stayed with Cedar, and everyone was happy.