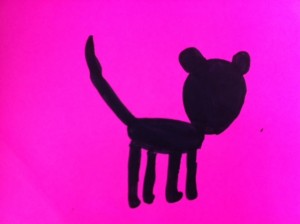 The first time I saw a tiger was at the Portland Zoo.  For some reason Eugene does not have a zoo.  It was a field trip with my kindergarten class.   I was six.  I’m seven now.  It was really cool.  It’s cool to see different kinds of wild animals.

When I first saw a tiger, there were two of them.  One was drinking from the pond, and the other was sleeping. I’m not sure if they were related.  Each was as big as a bike with a Burley trailer.

I didn’t say anything.  I just looked at them.  I thought they were really cool. I thought if I got a baby one then it would like me and I could be with it my whole life.  I would give it a name that would go with its personality.  If it ate my hamster (I bet it would) I would name it Augustus after my hamster.  I would get to pet it all the time and it would sleep with me.  It would probably be pretty heavy, though, so it would sleep on the side.  I would move by a pond and feed it fish.  My mom has a pond by her house but it’s just a tiny pond.  I doubt there are fish.

(as told to Zanne)