Mary DeMocker has been a local artist in Eugene for over 4 years. She created an outdoor art display in her local Eugene neighborhood to make people really think about the  Pacific Connector Gas Pipeline Project (PCGP) in Southern Oregon. The art display runs across many houses on one side of the block on 22nd Avenue including signs, a public comment station, articles, banners bearing the word “CONDEMNED” and a black pipeline across many front yards. When I interviewed her about the pipeline project, I asked about what inspired her to do the public art. She said, “My fear about putting the pipeline in is that I am worried about how much it will heat the planet because when methane gas leaks, it heats up the atmosphere more than carbon emissions do.”

Her neighbors seem to be supportive of Ms. DeMocker’s art and of her commitment to bring awareness to the pipeline. She said “Local people love it! I have had many supportive notes and emails, only one person a block away said it wasn’t pretty. Sometimes when I am writing in my window, people walk by and give me the thumbs up. They seem excited to get information because no one was talking about it in Eugene.” She said she wanted to bring attention to the pipeline in a way that was exciting and interesting.

Ms. DeMocker feels that people in Eugene should know about the pipeline because it is an important issue when the world is fighting to stop global warming.  She believes that the project takes peoples’ land under eminent domain which allows the government to take land for important purposes, but that it would be the first time that a foreign company would be allowed to do that for profit. There are also concerns with fracking for gas (breaking up rock below the surface of the Earth). Fracking can threaten drinking water supplies, disturb wildlife, and create pollution. According to Ms. DeMocker, this project threatens salmon spawning areas, fishing areas, and over 32 different species including the spotted owl.

Another issue is that 235 miles of clear cut forest would be required for the pipeline with 100 feet of area that would need to be kept clear with pesticides to stop new growth. Farmers would not be allowed to grow on that land and ranchers would not be allowed to dig for water near that land for their animals. There are also concerns about what would happen to animals if the pipeline broke or leaked in case of an earthquake. 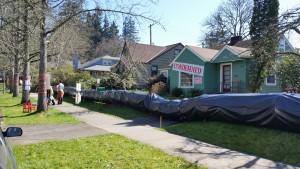 Ms. DeMocker is part of a group in Oregon called the 350 Group who are “working to preserve a livable planet.” They are concerned with the impact that the increase in gas supply might have when that supply from Oregon reaches Asia with consumers who would immediately use it. Ms. DeMocker said, “The subsequent methane burst from so many people using the gas at the same time could cause even more damage to the environment than the fracking. It would have a HUGE impact.”

Since this project has had so much interest across the state and country, I asked if Ms. DeMocker planned to do another art installation in the future. She said, “Probably. I have been doing them for the past 4 1/2 years. I do them when I am inspired, so I’m not sure yet. I had an idea for a holy well which is an old European definition for a well that is very deep and that you can use for a long journey ahead…it would be a way to fight fossil fuel exports with words or poems to work to change the environment to a more beautiful state.”