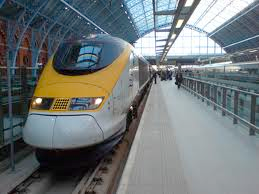 A Eurostar train in the station

As I write this I am underneath the waves of the English Channel. On a train. Yes, that’s right, on a train. And not an amphibious train, either. I am on the Eurostar. You see, this past week we were in London, which is on an island, and we took the train there via the 31-mile-long Channel Tunnel, an underwater tunnel connecting England and France, often known as the Chunnel.  No, you can’t see all the fish. The Channel (the strait the Chunnel goes under) is not very deep, so the tunnel starts a few miles inland and goes under the seabed. It makes my ears pop. I hope Mom bought some gum. On the French side (of the Channel) things are going well. We are living in Bordeaux (the X is silent) , a city famous for wine. That makes me whine. The Eurostar (the Channel Tunnel train) comes out of Paris, the capital of France and largest city, so we took the TGV from Bordeaux to Paris. The TGV (for Train a Grande Vitesse, French for Very Fast Train) is another awesome train, the fastest in the world. It goes 200 miles per hour. That means that it could zip across Oregon in an hour and a half or less, or from Eugene to Portland in half an hour. Yeah. That’s fast. The Eurostar is fast, but not nearly as fast as the TGV. It goes 186 miles per hour, or 300 kilometers per hour. Kilometers are like miles, except shorter. They use them to measure distances in France and other places. All in all, I am having a great time in France, the croissants are delicious, and I think the train is arriving in Paris so I gotta go!