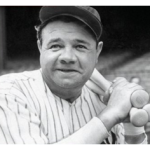 Babe Ruth before his big game

Babe Ruth was a great man. He was born on February 6, 1895. His real name was George Herman Ruth, Jr. He had lots of nicknames like ”The Bambino” and ”The Sultan of Swat.” Babe Ruth first played for the Baltimore Orioles and then he played for the Boston Red Socks. Babe Ruth got sold to the NY Yankees. Everybody in Boston thought it was the worst idea in baseball history! He was left handed and right handed. He pitched and hit the ball, but he mostly batted and threw left handed. Sadly, he died on August 16, 1948 at age 53. Everybody will remember how amazing he was at baseball.