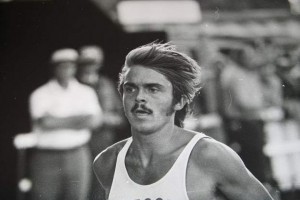 Born: January 25, 1951, in Coos Bay
Died: May 30, 1975, in Eugene
Steve Prefontaine was a huge reason that Eugene, Oregon, became the unofficial running capital of the whole United States. Most likely, Oregon’s greatest athlete, Steve Prefontaine, was “Pre” to the crowds that chanted his name as he ran. When he was still in college at University of Oregon, he won six college distant running titles including cross country. He also won two AAU (Amateur Athletic Union) crowns and set 15 American records at every single distance from 2 miles through 10,000 meters! Pre was also an amazing long distance runner at Marshfield High School in Coos Bay, and some of his high school records still stand. In all, he won 115 out of 151 outdoor track including some in high school. Even when he lost (which was very rare), his performances had flair and determination. One of the most memorable of them was the 5000m final in the 1972 Olympics, when 21 year old Prefontaine boldy took the lead with four laps to go. He ran very hard only to lose a medal in that race. Three years later, Steve Prefontaine had a very fatal car accident that cut short of his career. Without that, who knows how many more medals he could have won?

“Success isn’t How far you got, but the distance you traveled from where you started”  – PRE

« Amazing Facts About The Bullet Train
Soccer Survey: Who do you like? »