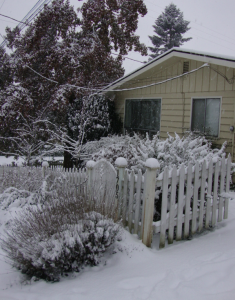 Snow is everywhere and sprinkled around Eugene, Oregon and drivers wrestle with the ice and snow! Driving with my family through the snow, I see a car spin around and around and around on a pool of ice. Luckily the car did not turn over. The City of Eugene and maybe more, was covered in a sheet of ice, and trees were uprooted (pulled up by the roots). Residents of Eugene say power was out at least once. Even I had it out for approximately 5 seconds. People are still picking up the mess that was made by the ice. The ice clung to the trees of Eugene, ripping them out one by one. Branches were broken and still are now. There were more than 7 accidents on I5, clogging it up. Our last snowstorm was longer than this one, but this one was fiercer than the last. Ice on every power line, tree, and road. Be careful and be cautious. The weather is unpredictable, and who knows when the next snowstorm is coming up. (CLOSED 4 SNOW DAYS IN DECEMBER http://www.4j.lane.edu/2013/12/school-calendar-revised/ BELOW ZERO http://www.registerguard.com/rg/news/local/30840463-75/eugene-streets-quiet-as-area-digs-out-from-snow.html.csp ONE TO TWO FEET OF SNOW ON VALLEY FLOOR DEPENDING ON ELEVATION) (FEBRUARY ICE/SNOW STORM http://www.kval.com/news/local/Friday-snowfall-in-Eugene-could-reach-10-inches—or-more-244425031.html) 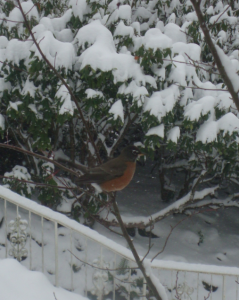