I’m back! I went plane spotting, saw awesome beaches and had sand flying at me at 50 miles per hour! Yay!

This is how I got to St Maarten: I learned that U.S Airways is horrible. First, we got delayed in Phoenix for 4 hours. Then, when we got on we had to get off and wait for 30 more minutes. Finally, we left and when we landed, we missed our flight in Charlotte. My mom and brother had to go from Charlotte to Miami to St Maarten. We had the good side since my dad and my sister (and her friend) got to go directly to St Maarten.

When we landed it was super hot and I was used to the airport coldness. So it felt like 90, but it was 80 and I first saw what I was in for:  I saw a plane take off but we were at the wrong end of the runway so it didn’t take off and blow sand and dirt at me, but I did get a video of it. Then we got our rental car and drove to our hotel. When we got there it looked really bad but when we got into our room it was awesome. There was silverware and a TV. There were 2 rooms so it was awesome. 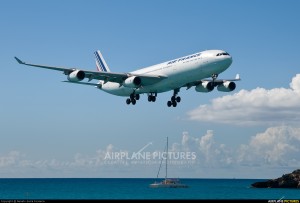 This is the same plane I saw! (source: airplane-pictures.net)

The next day we went plane spotting. When we got there, there was a 757 lining up and I stood right in front of the engine…. What a mistake! When the engines powered up I didn’t think the sand would hurt so bad, but it felt like shards of flying glass. It came at me and I was blown back into the water. If I went up to breathe, I couldn’t; I would get sand in my mouth. So I had to sit there for 10 seconds under water in horror.

When I came back up I saw the plane lift off into the air and people were cheering! I thought, OK, next time make a hole in the ground or ride the fence so I decided to make a hole. Next a 737 came. Colston (my brother) made a wall instead of a hole. When it started to power up, I felt like a Ostrich! I stuck my head in the hole and screamed. Colston (the man) decided to stand up. He got blown back to the ground, but I was safe in my hole. When I looked up everyone was cheering. I saw the plane takeoff at the end of the runway. I looked at Colston and he was shocked and covered with sand. When he started to talk, a wave came up behind him and washed him into the sea. I was laughing. Then when the next plane came it was a 737. Again I did the same thing except Colston rode on the fence. He said it wasn’t too bad, but when I saw him on the fence, he looked like he was burning alive.

When we went back to the hotel I was in shock with images of Colston burning – ahhhh the good days. Anyways…….  the next day I forgot to put on sunscreen so when I was in the ocean I felt a burning feeling and then at the end of the day I remembered “NOOOO! I forgot to put on sunscreen.” When I looked in the mirror, my face was fine. I had lobster for dinner that night. It was soooo good.

When I woke up I couldn’t see. I thought I was blind. When I felt my face it was swollen and I remembered that day we had to leave. The 747 came that day and we left. Dang it! When we got to the airport, I saw the 747 land. It was awesome for me, and it was awesome for the passengers because they were coming from Amsterdam. When we got on the plane the same thing happened. The 747 left before us and we were on U.S Airways (obviously.) It was terrible again when we got stuck in Charlotte and when we had to drive from Portland (PDX). When we got to the airport we saw a plane fly over us and thought it was nothing compared to St Maarten. The plane was 300 feet in the air. When we were driving away, we saw another plane fly above us. It was Alliegent. I was sure that plane was on time because it was perfectly 3:00 in the afternoon.

Photos by James’ family. Read Plane Spotting, Part 1, to learn how this all got started! 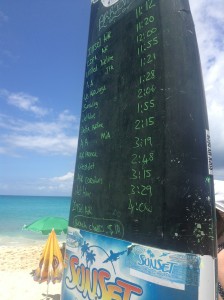 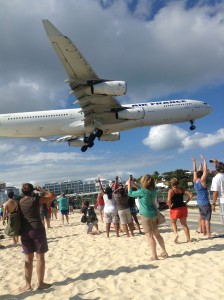 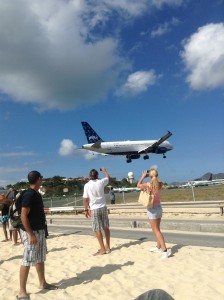 « Everything You Ever Needed to Know about Clone Troopers
Imaginary Pets »