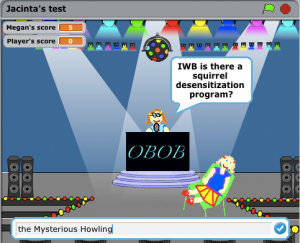 This is what the OBOB game looks like. Picture from Megan’s family.

What is Programming? Furthermore what is Scratch Programming? Programming is commands put together to form software. In this case for Scratch, you could make:  games, mazes and quizzes. Though Scratch is not meant to do complicated quizzes you still can do them. There are many different programming languages, and Scratch is one of them, a beginner app.  The things you can do on Scratch are a little limited but there’s a lot of color blocks that help you to build different programs. Each block has a specific command, like there’s a block that says ‘move’ which you can use to tell the sprite (the object you want to control) to move as many steps as you say. 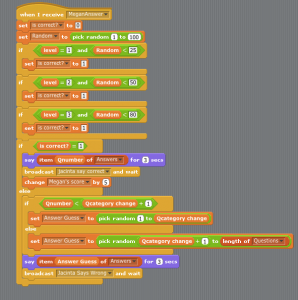 This is what some of the code for the OBOB game looks like. Picture from Megan’s family.

I love Scratch, and am presently working on an OBOB* Quiz which I will be talking about. I have a link to my game below for you to play! My OBOB game has a narrator (Jacinta) who asks questions and me (Megan) to play  against for the main sprites. The narrator asks Megan a question first. Then you have to answer.  She picks an answer, the percent of  a correct answer is chosen from the level you chose at the beginning of the game. Next it will be your turn! You do not have to answer the IWB questions with the author name andif you don’t answer the question correctly then the question bounces over to the other competitor. Each person has 4 questions to answer.

If you visit this site, you can play my game (http://scratch.mit.edu/projects/HoodooGirl/3116569)

I am also (right now) working on a game called Mort’s** Game. For Christmas I got a  Scratch programming book that helps me learn more about how to program and also think of ideas for games! The OBOB game was not made from the book because the book is a beginner book and the OBOB game is more advanced. But I have made various games from the book. They are named: A Space Odyssey, the Louvre, Hack Attack, Rio Shoot-Out, Desert Rally Race, and Escape the Maze.

If you would like to see a simple program from Scratch, I have included a picture! 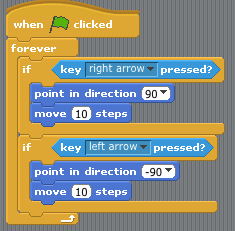 A picture of some basic code. Picture from Megan’s family.

This code is a program you could put together to make a sprite move. There are many ways to do this, but this is a way to program a sprite to move left or right (after the green flag is pressed) by pressing the right or left key. This is saying when the green flag is clicked forever it will check if the player has pressed the left or right key. If so, it will point in the direction of the key (right is 90, left is -90, up is 0 and down is 180) and move ten steps.

* OBOB stands for Oregon Battle of the Books. There are 16 good books chosen by librarians. If schools choose to do OBOB, then teams chosen by the kids will compte. The best ranked team will move on the to regionals.”

** Mort is a character in the Madagascar movies and he is a mouse lemur.

I love to ski, program with Scratch (if you're wondering about what Scratch is then you can read my post about that it may be already up but it may still be getting published depending the time you read this!), sewing (you can read my already-published sewing machine post!), ballet, viola, piano, publishing class (from Edison Edu blogs!), and homework as well as school! I love our family cat Cappucino, and love to read, especially "Harry Potter" though I've only read the 1st and 2nd so far.
View all posts by meganwrites →