Shimmer and the Bubble Adventure

Shimmer and the Bubble Adventure 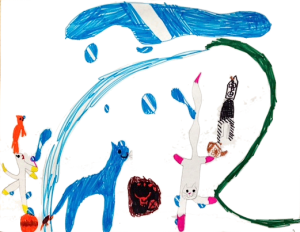 Shimmer and the Bubble Adventure, illustrated by Ellie

The yellow paint on the walls were old and peely. Ellie decides to go and get more paint to paint the walls with. While she is gone, the cats become bored. Shimmer has an idea. She huddles with the other cats. They decide to go digging in the closet for interesting stuff. Once they go in, they find a bunch of colorful paints and a barrel of bubbles. They exchange excited looks. When Ellie comes back, she finds a spilled barrel of bubbles and colorful paints everywhere. She slips and twists and turns and floats up on a bubble. The bubble pops and the strongest cat Sky catches her. Sky runs around and gives Ellie a piggyback ride. Pinky slips so much she flies in to the air and lands on her tippy paw.

Ellie decides to get ice-cream. On the way to the ice-cream shop, Dodo spies a small tunnel that only cats could fit into. The cats all agree to go in, and Shimmer honks her nose to make it glow. By the light of Shimmer’s nose, they go into the tunnel one by one. When they are far deep into the tunnel, a tiny frog hops out from a secret passageway. The frog asks them if they were lost and they respond, “yes.”  The frog tells them that a ruby was close by and that the cats would be able to see it. He gave them a map to show them the way out. They bid farewell to the kind frog and went on towards the red ruby.

Dodo spots some shiny rubies along the ceiling, but they were only tiny.  Soon they start seeing bigger and bigger rubies. Finally, they see a giant ruby that only Sky would be able to lift up. Then a giant red ox jumped out from a secret passageway and yelled “My ruby!”. He breaks the cave as the cats run from him. As they go, the rubies on the ceiling begin to crack. The ox gets madder and madder as he sees his rubies being crushed, but he still romped on for his giant ruby. The cats soon make it out of the passageway and ran into their house.

Ellie was just entering and said, “Where have you been!?”, but before the cats can answer the ox romps in and notices the floor is bubbly and quickly takes more balance. It was too late. The ox slid down and did the splits. “AIYYYYYYYYYYYYYYYYYE!!” and he runs out as fast as he can. As he ran out, he said “Wow. I never noticed that cats could be very dangerous. As for humans, I don’t care about them,” but he was wrong. As he ran to his hole people scream in terror. he notices his mistake and tried to balance on hind feet to calm them down.

As to his surprise, the ox did a cartwheel and crashed down into his cave. The cave became more slippery with broken parts of ruby on the ceiling. Finally, he crashes into a dead end of his cave and faints. Then rubies began to fall from the ceiling and bury him into his cave, but beware, he might just rise again! Stay tuned for Shimmer and the Bubble Adventure Part 2.