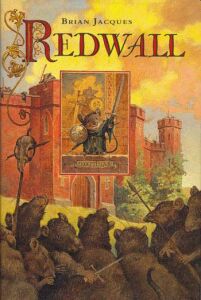 Are you a fan of fantasy? Are your parents urging you to read “classics” that make you feel like falling asleep? Well, here’s a series that will make you WANT to read.

Redwall is epic fantasy. The 15 (or more!) books in the series tell stories about mice, squirrels, hedgehogs, moles, and other various woodland creatures on perilous adventures to save their home, Redwall Abbey. Redwall was created by mice as (I took this quote from the book) “a safe haven where any creature can rest in peace.”

The first book is called, well, Redwall. Redwall is about a young mouse named Matthias, who is always restless and feels like  there is more to life than the peaceful life at Redwall. An evil rat, Cluny, sets his sights on Redwall as the ultimate treasure. Matthias, with the guidance of Martin the Warrior, a spirit, works on an ingenious plan to save Redwall. He meets many friends along the way, including Sparra Queen Warbeak, Jess and Sam Squirrel, and the Guosim (Guerilla Union Of Shrews In Mossflower). Matthias goes on a heroic quest to recover Martin’s legendary blade.

In the prequel, Mossflower, the creatures of Mossflower Wood struggle to overthrow the rule of Tsarmina, a tricky wildcat queen, and her large army. They do this with the help of the heroic Martin the Warrior and his comrades, Gonff the Mousethief and Dinny the Mole. Martin travels from the River Moss to Salamandastron (SA-la-MAN-des-tron), the great dormant volcano that is home to the regiment of traveling hares known as the Long Patrol and the Badger Lord of the mountain. Martin is forged a blade, made of star-metal, to defeat Tsarmina as a gift from Boar the Fighter, the Badger Lord.

There are many more books in the series, and all of them are adventurous and have many heroes and heroines that you won’t forget!

Kate is a science fanatic and wants to prevent global warming. She likes music, reading, pixel art and electronics.
View all posts by katewrites →