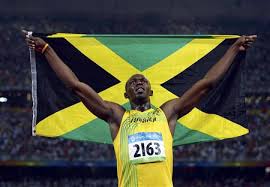 Editor’s Note:  Caleb wrote this before the Olympics.  We’re looking forward to an update soon!

Usain Bolt is a track runner that’s in the Olympics.  He’s the fastest man in the world! He was born on August 21, 1986, in Sherwood. His dad’s name is Wellesly, his mom is named Jennifer Bolt. He also has a sister and a brother, Sadeeki and Sherine. His mom and dad owned a grocery store. When he was there, he mostly played cricket or football in the street with his brother. When he was a little kid he went to a school that had all-ages. That’s where it all started. He began to sprint. When he was 12, he became the school’s fastest runner for the 100 meters. Soon, he went to a high school called William Knibb Memorial High School. He played Cricket and showed his Cricket coach his speed. His coach told him to start playing track instead of Cricket. He broke the world record and Olympic record in the 100 meters and the 200 meters relay. Usain won a gold metal at the 2002 World Junior Championships. He’s in track and field. He also runs for Jamaica. His world record that he broke is 9.58. He also got beat by a guy named Yohan Blake.

Will he beat Blake and get another gold metal, and will he set the record again?