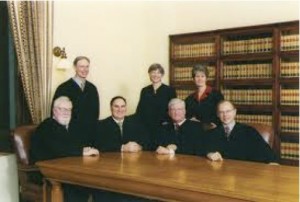 What is weird about the Supreme Court is that they are not allowed to reveal any political affiliation when they go to events like the State of the Union Address, which is the address that the president gives telling the state of the country at that time, so they are not allowed to do any political demonstration. There have been some cases that some people disagree with and most people hate the law.

You end up in Supreme Court after appealing a case through all the courts possible, or if you commit a federal crime, like copying a movie. By the way, appealing is a petition to review a case that has been decided by a jury.

Look for my interview with Oregon Supreme Court Justice Robert Durham on our blog this spring.

« The Lions: an Editorial
How to bake with one recipe chart »