Back again, that’s right, it’s Tor. This time I will be talking on the subject of trains, France’s favorite way to get around.

Surely they do drive cars here, and there are superhighways and airports, but nearly every town has a train station. The trains here go much faster than in America, too. You may dimly recall from my column from the fall Light Bulb that there is also a 200-mph train here. It is called the TGV, for Train à Grande Vitesse, or Train of Great Speed (picture included). 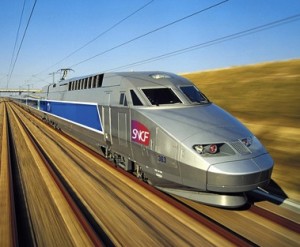 There are very few freight trains here, and they are outnumbered by passenger trains. Given how many trains there are here, one would expect there to be lots of level crossings (places where the road crosses the tracks) here. But actually, there are barely any. If a train has to go through a built-up area like central Bordeaux (the town where I live), it goes in a tunnel.

But the story doesn’t stop in town! Most cities have more than one train station, and trams (light rail, like in Portland) are abundant. Maybe in thirty years, there will be a train system like this in the United States, but it will never be exactly like the amazing French railway system. If you want to see trains like this, then you have two options: 1) go to France; 2) wait 30 years (satisfaction not guaranteed).

« How to get on a flight simulator
The Lions: an Editorial »